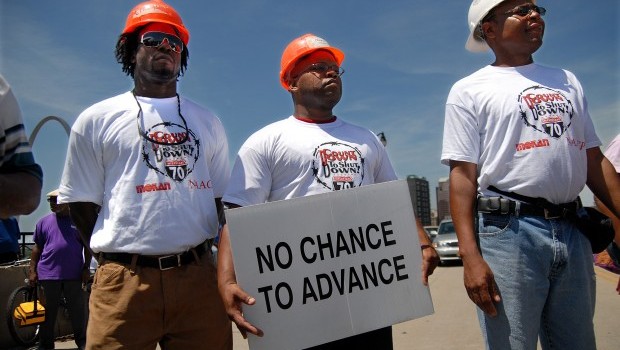 The Legacy of Minorities in the Construction Industry

How the National Association of Minority Contractors (NAMC) paved the way

As we close out this abbreviated month designated to the accomplishments of African Americans, I cannot help but ponder the contributions made to the construction industry, not only by African Americans but by other minorities as well. However, I can assure you that there has been no greater contribution than that of the founding members of the National Association of Minority Contractors (NAMC).

Here is my story and my experience with the NAMC, a fantastic organization and resource to minorities in our industry:  Several months ago a friend asked me to get involved in the start-up of a local chapter of the organization. My first inclination was to waste no time with another ineffective, self-serving advocacy organization. To this point, I had been cynical toward the seeming lack of progress of minority contractors and the organizations that advocate for them, as construction dollars for minorities have been so low that it is a wonder minority contractors exist at all. My friend’s persistence ultimately peeked my curiosity, and I took it upon myself to research the group. And, wow, was I blown away by its almost 50 years of accomplishments on behalf of minority contractors (i.e. African, Asian and Mexican-American). In reality, social-political organizations such as NAMC have, since the sixties, fought courageous battles to achieve equity and fairness in all areas of life in America. Unfortunately, many of these victories have been diluted over the past thirty years or so.

As a child growing up in Oakland, California, in the sixties, I was immersed in the coverage of groups such as the Black Panthers and the Mexican farm workers led by Caesar Chavez.  Little did I realize that along with the fight being waged for social justice, there were luminaries such as Congressmen Parren Mitchell and Ronald Dellums, Congresswoman Eleanor Holmes Norton, Assemblyman Willie Brown, Jr. and Mayor Maynard Jackson who were also waging a war on an economic front. It is from this social-political backdrop that Ray Dones and Joe Debro co-founded NAMC. The following is a brief history of the evolution of minorities in construction that you should know and be encouraged by:

1964 – The Civil Rights Act of 1964 was a landmark piece of legislation outlawing discrimination based on race, color, religion, sex or national origin. It ended unequal application of voter registration requirements and racial segregation at the workplace and by facilities that served the general public. It is considered one of the crowning legislative achievements of the Civil Rights Movement.

Pre-1966 – Minority contractors were receiving less than .001% of the total publicly funded construction dollars in the country. In addition, many states were unionized, and it was virtually impossible for most minorities to get in. Add to this the lack of bonding, financing and insurance options, and it was downright tough being a minority contractor.

1966 – Ray Dones and Joe Debro, recognizing that they both had mutual interest in the success and development of minority contractors, began discussions with other contractors in the Oakland Bay Area to formulate a strategy to improve their mutual plight. Through these discussions, they decided to create an educational association, the General & Specialty Contractors Association, which would educate and train its members to excel in light of the changing social and political atmosphere. This would ultimately be the genesis of NAMC.

1968 – Realizing that minority contractors around the country were experiencing similar issues, such as lack of access to financing, bonding and projects, Ray Dones believed that the formulation of a national organization to advocate at the federal level would provide the greatest impetus for change. In 1969, the first conference of the National Association of Minority Contractors was held in San Francisco, in which Ray Dones was elected President and Joe Debro, Executive Director.

1970 – As a result of the pressures brought on by NAMC and other advocacy groups to level the playing field for minority contractors during the 70’s, tremendous gains in opportunities were achieved. What was once a paltry one-tenth of 1% of publicly funded construction projects grew to more than 1.5% of construction dollars going to minorities during this period. These gains were bolstered by such programs as loan guarantees, federal and state set-asides, training programs, bonding assistance and the perpetually besieged 8(A) business development program.

1980 – Unfortunately during this decade, 1.5% of publicly funded work going to minority contractors was too much for some to handle. As a result, numerous opposing entities began to challenge the constitutionality of various minority programs. The landmark 1989 Supreme Court decision, City of Richmond v. J.A. Croson Company, would forever change the effectiveness of affirmative action as a whole. In this decision, the Court ruled that city ordinances requiring 30% participation by minority contractors on all city contracts were unconstitutional. Subsequently, numerous other challenges to affirmative action related programs were initiated, and, still today, mandatory set-asides are virtually non-existent in all fifty states.

2016 – Although NAMC and others continue to fight, it looks like minority contractors have almost come full circle in the quest for equity, once again being relegated to receiving less than 1% of all publicly financed construction dollars and even less of private spending. However, we will not be deterred, as we are now better trained, have greater resources and information, and have the same spirit of those who came before us. We CAN, we Must turn things around.

So as we close another Black History Month, let us not forget those who paved the way for us and our responsibility to carry the same determination and inspiration, so that those who come behind will have every opportunity afforded them. In my years, I have personally witnessed the ebbs and flows of minority inequality in all areas, and I take it upon myself to do everything in my power to see workplace equality in its fullness. Partnering with the NAMC has given me a foundation to make a difference.

Vince Fudzie, MBA, CPA, CIRA, is the Managing Member of Triune. Founded in 1997 with headquarters in Dallas, Triune is a leading, integrated, design-build General Contractor in the Southwest region of the country.